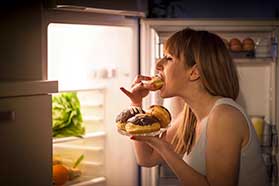 Binge eating disorder is characterized by intermittent episodes of uncontrollable binges, eating an unreasonably large amount of food in a very short amount of time. Contrary to popular belief, those with Binge Eating Disorder (BED) are not always overweight and most obese people don't have the disorder. With most binge episodes happening in private, outward signs of the disorder are not always apparent. Individuals often find themselves eating large amounts of food in a short period of time, also called a binge. These episodes are sometimes triggered emotionally, though they can happen spontaneously. Post-binge, BED can leave its sufferers with a feeling of lost control and shame. These feelings can trigger more binge episodes, leaving those with BED feeling as though they are in an endless cycle. As more than 2.6% of the U.S. population experiences this condition, BED is the most prevalent eating disorder, surpassing the combined numbers (1.5%) of anorexia and bulimia combined. Because of increased awareness, more treatment options and support systems are available today.

You can find eating disorder support that works for you, today. To seek help from a healthcare professional in Franklin Lakes that specializes in binge eating disorder treatment, call (201) 806-6099 or contact Medwell Orthopedics & Functional Medicine for Men & Women online.

Since weight is not necessarily an indicator of an eating disorder, there are not always apparent physical signs or symptoms of BED. There are a number of behavioral binge eating disorder symptoms that are apparent, including:

There are also many emotional symptoms that accompany binge eating disorder. These include:

Unlike bulimics who need to purge after a binge, binge eaters try to eat normal meals following a binge. However, this often leads to restricting food and thus triggers more binge eating, resulting in a vicious cycle. These adverse emotional ramifications can spill over into other areas of life for a binge eater, affecting school, work and interpersonal relationships. When individuals are overweight and obese from the poor eating habits of BED, physical symptoms can present with complications which include:

Though it can be a sensitive topic, one you may hesitate to discuss, it's important to talk to your healthcare provider if you suspect that you or a loved one may have BED. Binge eating disorder treatments include:

Successful recovery encompasses all facets of an individual's disorder. But recovery begins with recognizing that there is a problem and seeking treatment. To find a healthcare professional in Franklin Lakes that specializes in binge eating disorder treatment, call (201) 806-6099 or contact Medwell Orthopedics & Functional Medicine for Men & Women online.

Meet With an Eating Disorder Specialist in Franklin Lakes
Request Your Appointment Today!